So the five of us met at the airport late Wednesday night to box up our bikes and check in for our 2:10am flight from Seattle to Taipei. Richard, already asleep in his hotel room in Taiwan, would meet us when we arrived at our hotel the morning after the day after we left. The was time for a final beer at the Alaska Cafe, the last bar open at SeaTac Airport, and then it we made for our 747 along with 400 other passengers. Well yes, thank you, it was special. 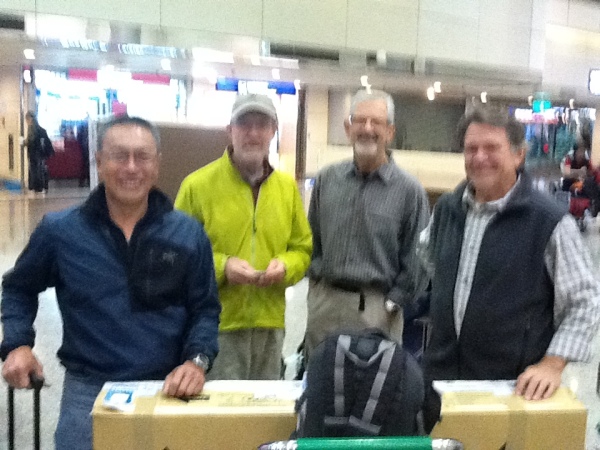 We had been up all day and now we faced 12 and a half hours hurtling across the Pacific, sleeping intermittently if at all, but gaining 15 hours of time on the clock.

Landing in Taiwan at 5:45 on Friday morning was like waking into a parallel universe, a rabbit hole where people talk in familiar ways but are completely unintelligible, where signs that might provide help and instruction turn out to be simply opaque — even the figures on the signs refuse to offer a scrap of meaning. On the freeways and highways and streets, cars, buses, and teeming swarms of motor scooters negotiate around each other madly, swerving side to side, passing on the right and left at breathtaking speeds. And in this universe, most curiously, no one honks. So, Jetlagged and exhausted and wheyfaced, we took it all in with stunned wits.

Our guide, Stephen Chen, appeared at the airport to greet us, and he and his brother David took us in two vans to the Capital Hotel, where we dropped off our bikes and luggage. To our wonderment — and and fuzzy bewilderment — we were now all herded into Stephen’s van for a day stuffed with adventures. A two hour drive took us out of Taipei through an eight-mile(!) tunnel to the aboriginal Hanxi village of the Attayal tribe — one of 14 tribes remaining on the island of Taiwan. The population of Taiwan is around 22 million people, and the tribes together number only about 80,000, but this tribe, the Bulau Bulau, work particularly hard to retrieve their culture and keep it intact. To reach the village we had to cross the longest suspension footbridge on Taiwan and travel in 4X4 Land Cruisers along steep and rutted roads into mountainous, thickly wooded foothills. Then we hiked further up narrower trails to discover the village itself and a cheery welcome by people of the tribe. Only 30 visitors a day are allowed to come to this tribal center, which feels like a cross between a collection of log cabins and an organic gardening center. 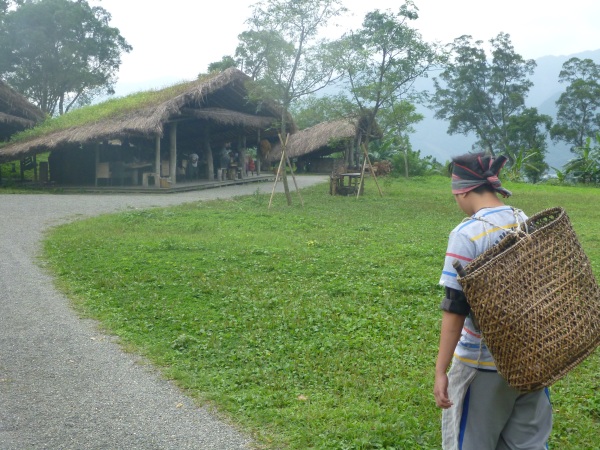 After touring around for an hour or so we were treated to lunch, a spectacular display of fresh fruits and vegetables and wild boar strips cooked over an open fire, plus millet wine. Millet wine — who knew? More touring followed, and then an early six-course dinner, including more millet wine, chicken and pork, plus entertaining singing and dancing. The entire experience as wonderfully spirited, and when we left, around sunset, we were filled with wonder at the determination and the inventiveness of these people. 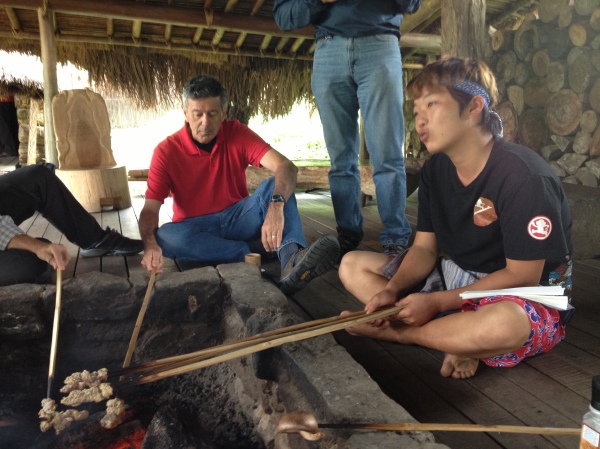 Needless to say, the two-hour return leg of the trip had all of us nodding and dozing as we drove back towards Taipei. But the parade of events had not yet ended. Winding our way into the small town of Jingtong, Stephen led us on foot to a dark quaint old street, which we followed to a little restored wooded railway station. Nearby we found a little store where we bought some flying lanterns. Once a coal mining town, Jingtong has restored some of its buildings and has developed an appeal as a quaint tourist town. More than, Jingtong has become a center for the “flying lanterns.” These are colored rice paper cylinders about three to four feet high, closed at the top and kept open by means of a bamboo hoop on the lower rim. Wires running across the hoop allows for thick paper, saturated with oil and gasoline, to be held in its center. When that is lit, the cylinder fills with hot air and rises into the sky like a rocket in slow motion. The six of us got three of these flying lanterns and prepared them by inscribing wishes on their sides; then we set them free and watched each one disappear into the night clouds. After that, our most ardent wish was for a short drive back to our hotel rooms, for a hot shower and our welcoming beds, where we at last toppled like felled soldiers around 10:00pm.

Tomorrow would bring another day of sights and sounds in Taipei, but for now the simple pleasure of sleep — Shakespeare’s “balm of Kings” — promised relief after this long and lovely first day of adventures.

4 thoughts on “Lost in time and space”