The wishes from our day at the temples of Taipei seemed to have paid off in the morning, which dawned gray with clouds but not rainy. At 6:30 we gathered outside the hotel and prepared to ride to the train station, a short Sunday morning jaunt through a very quiet Taipei. 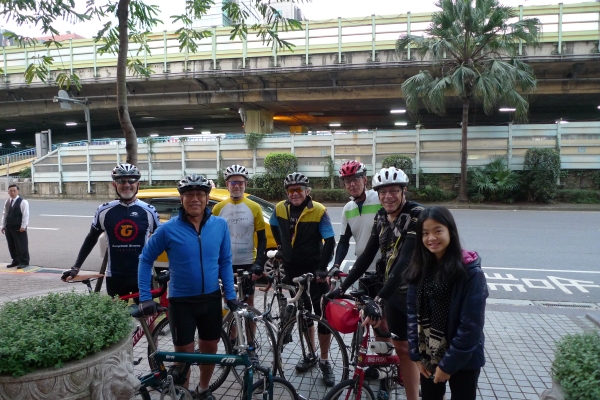 We grabbed some coffee at the Songshan train station 7 – 11 store and boarded the train, which had several cars specifically set up for bikes and riders. 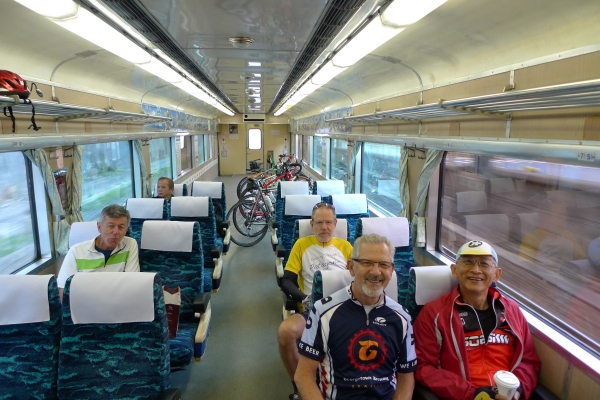 We drank our coffees and dozed on and off, keen to get onto our bikes and to see parts of Taiwan that few have a chance to experience. The train snaked its way out of the city, passing northeast through industrial sectors and high rises, fields and increasingly steep wooded hills. Then tunnels galore, a descent onto the coastal plain and South along the coast itself, with the blue Pacific rolling onto empty shores. In contrast to the crowded western side of the island, relatively few live on the East, After two and a half hours we jumped train at the north end of Hualien, a relatively small town (about the size of Seattle), situated on the coast. 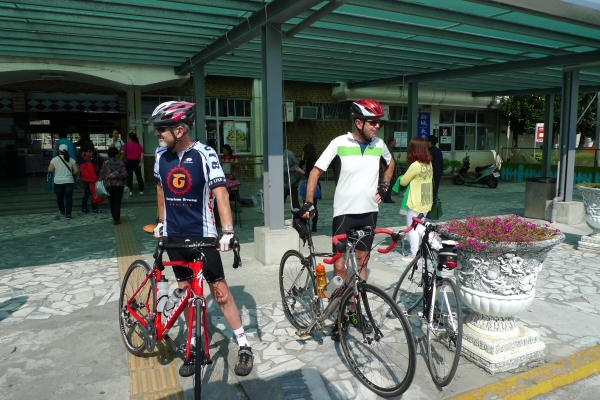 The sun was out, the air was soft and warm, and we sped off in the direction of the famed Taroko Gorge — westward, back inland and up a narrow throat of road. 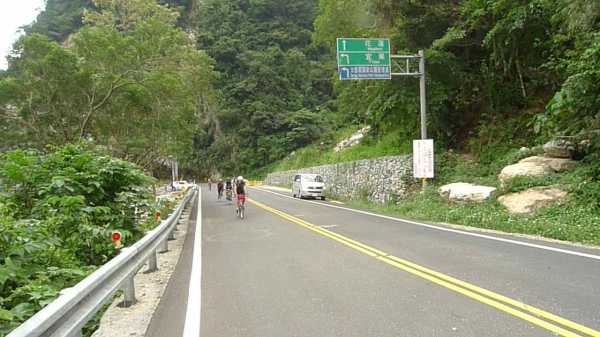 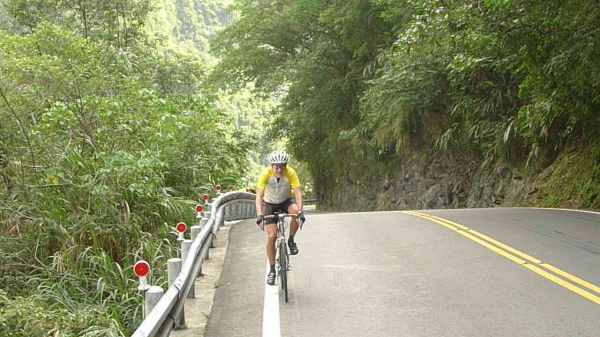 On the way to Taroko Gorge

Soon we were to learn why this gorge is world famous. Rounding a corner we glimpsed towering gray cliffs; as we approached closer we realized that they formed a tremendous sheer wall opposite the ascending road, with a suspension bridge hanging perilously across. The wall itself is marble, sometimes pocked and pitted, reaching upward on a vast scale with light blue waters rushing and roaring over rapids below. 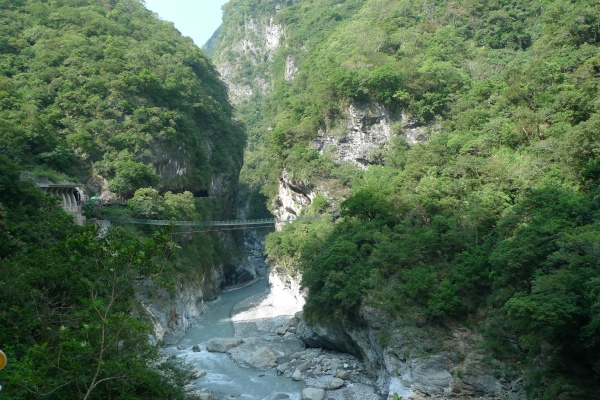 We continued our ascent and the road we followed literally disappeared into the face on our side of the gorge. It had bed hand hewn out of the marble, with columns and lookout windows that peered into the winding abyss. 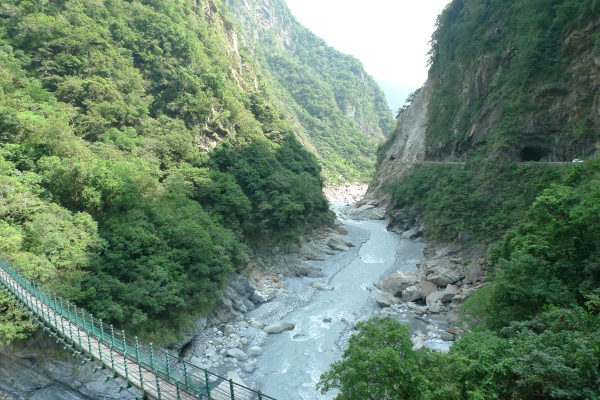 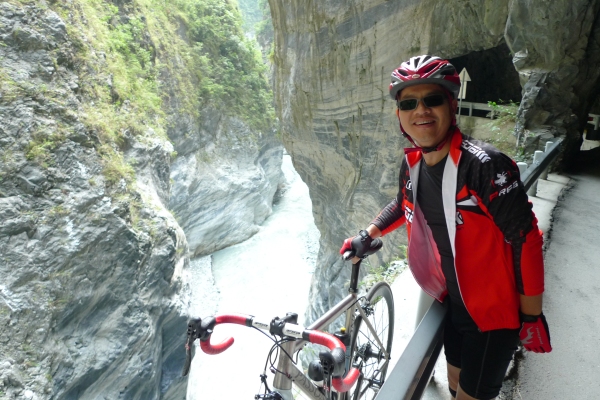 The pictures tell the story. We followed the rock-hewn road for miles through the gorge, eventually emerging and continuing up to a pass, and then finding the place where we had lunch reservations, a charming inn a mile or two off the road. Feasting ensued… 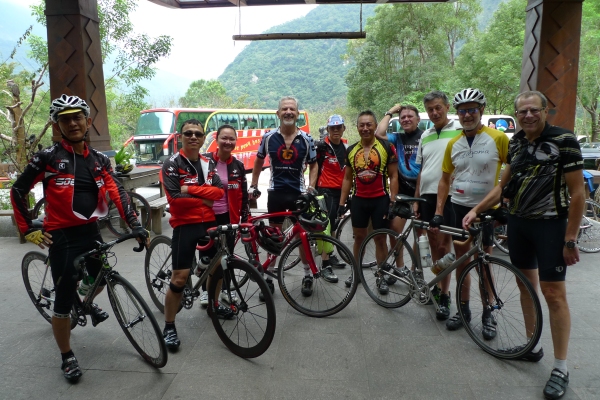 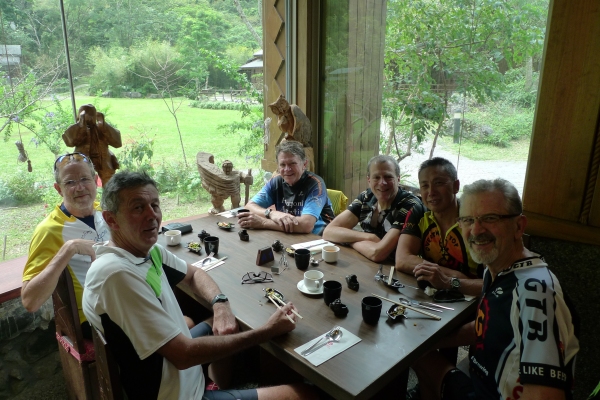 Then the descent, fast and furious. Clouds had formed during lunch, and those who dawdled were soaked in a sudden and violent rainstorm. 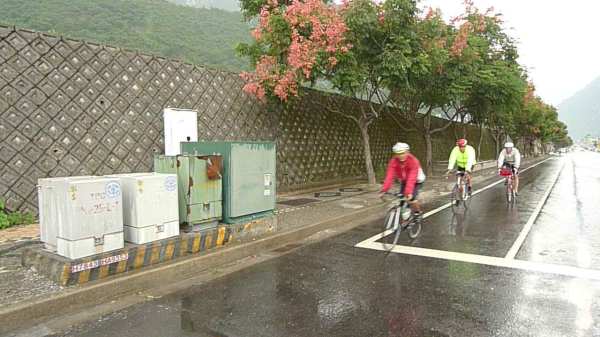 Most had made it down back to the coastal highway by then, however, and after the rain stopped we found our hotel.

We managed dinner in the busy flashing world of Hualien markets, and again found exquisite food. You will have noticed that food surfaces in this blog frequently, and for good reason. First of all, the meals are often long, with a seemingly endless procession of dishes brought in some secret sequence to the table. And it helps to understand that food plays a huge part in Taiwanese culture as expressions of graciousness and generosity. Indeed, the ordinary greeting in Cantonese can be translated as “Eaten yet?”

Oh yes, we have seen the Marble Halls of Taroko Gorge and eaten…

4 thoughts on “I Dreamt I Dwelt in Marble Halls”